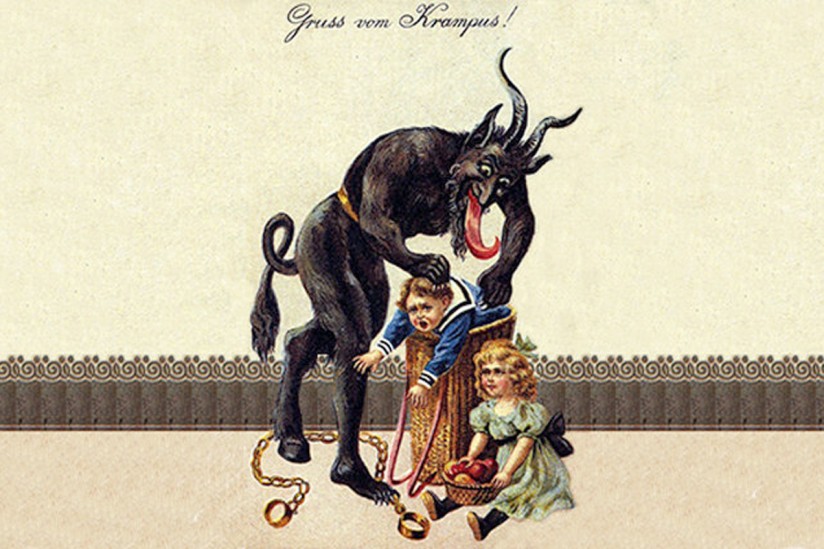 Krampus – His Story, His Power

It’s time for a few thoughts on Krampus. You probably heard the name in December, if not before.

Krampus is what I’d call an ‘evolved deity’ – a combination of several folk legends, melded into one stronger, more cohesive whole. An amalgam of ideas given immortal flesh.

In case you aren’t aware of his story, here’s a brief portrayal: Krampus is the Northern/Eastern European counterpart to St. Nicholas (their version of Santa Claus). With horns, a long red tongue, and goatish legs, he’s a sort of ‘Christmas Devil.’ The “bad cop” to Old Saint Nick’s “good cop.”

The building blocks of his story come from old tales in Austria, Hungary, parts of Poland, Germany, the Czech Republic, etc. He’s lived in the minds of these peoples for centuries. Only recently has his story traveled across the world entire.

According to the legends, December 6 is St. Nicholas’ Day. The day happy children open gifts and enjoy treats around a warm fire & a dazzling tree.

The night before however, in the dark of December 5, comes Krampusnacht – Krampus Night. The time when Krampus emerges from his mysterious lair, hooves crunching in snow, tongue tasting the air…an unwelcome guest coming to visit.

Where St. Nicholas rewards good children during the holidays with gifts, Krampus punishes the bad children on Krampusnacht. His punishments range from beatings with a bundle of wooden sticks, to leaving coal in stockings, to abduction & consumption of the worst children.

Yes, Krampus eats bad kids for the holidays. I’d guess a few parents out there wouldn’t mind this too much… 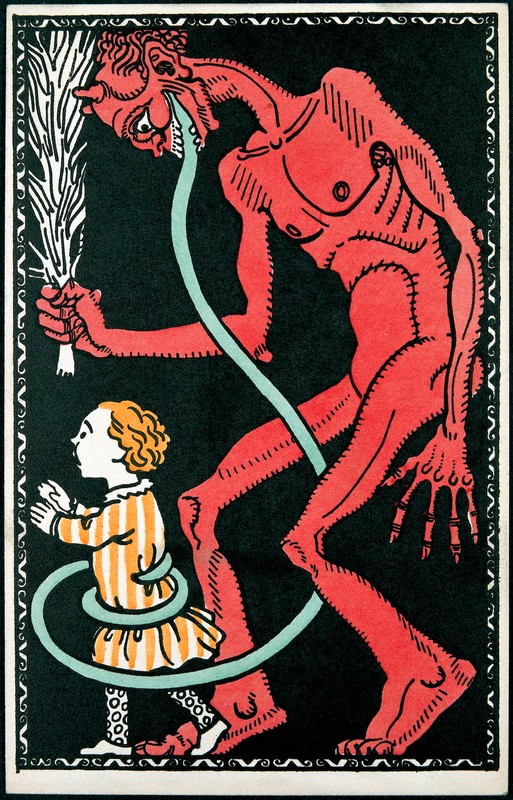 I’ve been fascinated by this entity for years. It’s a powerful archetype on its own. But its complexity makes it even more intriguing. He’s more than just a boogeyman for naughty children – like the gods of old, he has purpose.

What is that purpose? Well, if you think about it, one core truth about Krampus is that he’s not evil. Like capital-E, “bwahaha” Evil.

The horns, fur, tongue – all meant to evoke his power. To make his presence felt in the spirit.

The legends say that for one night, Krampus breaks his chains and exacts his punishments across the land. Even slaking the darkest thirst by feeding upon the worst children. The rest of the year, he’s bound in his otherworldly lair.

What’s he doing those many days? What does this ancient, primal force do while we go about our lives?